With a new school year coming around, I decided that my unfortunately decrepit ThinkPad needed to be replaced. While I was researching my options (and being continuously disappointed by them), I came across Framework, an upstart company based in Palo Alto, CA, that has an axe to grind about the Right to Repair movement. Their first offering: A modular ultrabook. Just what I was looking for.

Now, this isn’t the MNT Reform or any of the various “upgradeable” laptops currently on the market. It isn’t made of LEGO bricks–it’s a very portable, thin, light ultrabook with a professional fit and finish. The real benefit is that every part is meant to be replaceable, from the power supply and battery to the monitor bezel.

Designed to be Repaired

The Framework laptop, while not a “hacker’s laptop” like the aforementioned MNT Reform, was designed from the ground up to be repaired. In fact, it comes in two flavors: DIY and Prebuilt. The DIY version can be purchased for as little as $999, allowing the user to provide their own SSD and RAM. I got the prebuilt version because it turned out to be slightly cheaper for the options I wanted.

But the SSD and RAM aren’t the only parts that are user-replaceable. The monitor, monitor bezel, keyboard, fingerprint reader, RAM, SSD, battery, motherboard, and more are all designed to be easily swapped out even by users with no laptop repair experience. The computer is even packaged with a screwdriver/spudger combo!\

There were no compromises on performance with the edition of the Framework laptop that I received. With an Intel® Core™ i7-1165G7 processor and 16GB of RAM, I can multitask and play light games all day long. This isn’t a gaming laptop–there are no discrete GPU options–but for an ultrabook, it packs a punch. Other options include the i5-1135G7 and i7-1185G7 processors and up to 32GB of RAM.

The Framework laptop has four USB-C ports on either side, which are recessed into the frame. Expansion cards that can be purchased through Framework’s marketplace (or from third-party sellers) can give you a plethora of options that can be swapped on the go. I received my laptop with two USB-C cards and two USB-A cards.

If you can’t tell, I really love this laptop! I haven’t gone in-depth with my review as others have done so much better than I ever could, but my response to this computer is overwhelmingly positive. Since needing to upgrade to more powerful hardware is an eventuality, with Framework I know that I’ll be able to swap out those components myself rather than buy a whole new device, which is a huge cost-saver and more environmentally friendly than the prevailing business model in the industry.

I hope to see a lot more of these in the wild. The Anti-Macbook has arrived! 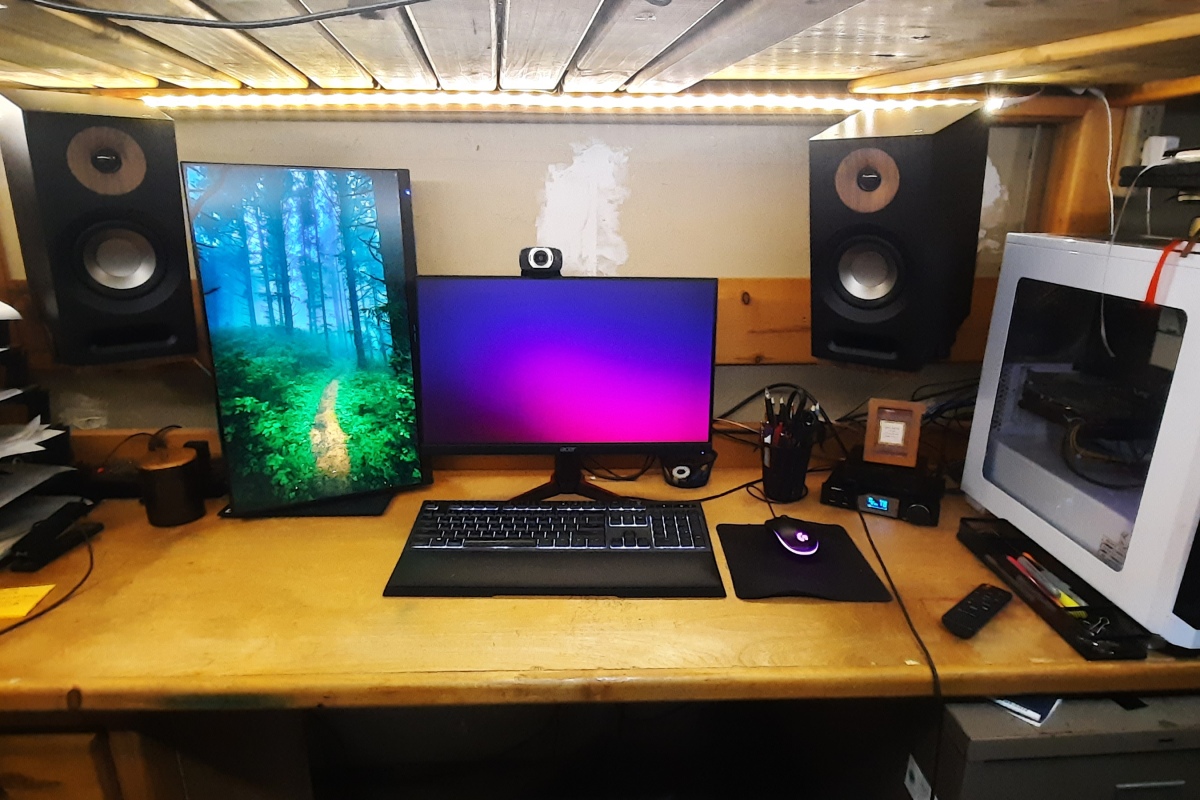 Unlike so many, I’ve had the privilege of being able to continue to work throughout the pandemic with only minor interruptions. I haven’t been spending excessive amounts of time at home, and I’ve still had to squeeze a lot out of my off-time, with the computer business, school, and my volunteer work.

That being said, since I plan to significantly increase my school work load starting in the fall, I decided that I should put my stimulus to use and make some changes to my home workstation while it’s still financially feasible for me. Here, I’ll be documenting those changes as I go.

First, the before picture:

My planned upgrades are high-fidelity audio and a second monitor. Productivity to the max!

After several days of working with these upgrades, I can say I’m very satisfied! I spent a little too much money, I think, and bought some things that I ended up not needing. I discovered that I prefer separate headphone and speaker controls, so I didn’t use the small RCA cables I had bought to connect the Atom amplifier to the D05.

I have to say that having a second monitor in portrait mode is extremely nice. I can use it for referring to documentation or textbooks while doing my main work on the landscape monitor. I highly recommend this configuration if you’re thinking about getting a second monitor for your own workspace.

As always, be well.

Operating system vulnerabilities allow people with evil intent to do a variety of nefarious activities on your computer. They could install cryptocurrency miners, botnets, keyloggers, or other malicious software. They can also steal your data or hold it hostage through a ransomware attack. Since these are exploits of weaknesses in the operating system itself, there isn’t a lot that your antivirus software can do to stop them—only regular updates provided by Microsoft can patch these holes in your system security. And when those updates stop coming, you will be utterly defenseless. Is the convenience of putting off your upgrade worth the risk?

END_OF_DOCUMENT_TOKEN_TO_BE_REPLACED

For creators of all kinds, a mysterious and illusive threat lurks in places we don’t like to think about. You’ve probably stumbled upon frightening reminders of this threat once or twice—such as on a gaming mod site like nexusmods.com, or even on Wattpad, when a content creator’s hard drive fails and they’re unable to continue their work. A sad end to some fantastic creations!

Happily, there is something you can do to protect yourself from this kind of disaster. Simply, you need to back up your stories. This is such an easy task that anyone can do it, but unfortunately, it feels too complicated for many people. I hope this advice will make keeping your precious data backed up seem less advanced for you!